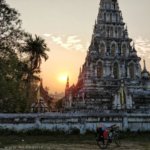 Earlier this year I went on my third solo, self planned cycle tour. This time in Thailand. It was a hot (literally and figuratively) 1000 kms of cycling in 2 months with long stays in Chiang Mai and Bangkok. I was very clear about the kind of routes I wanted to cycle - they had to be back roads, scenic and good quality as possible. I mainly used maps.me and as a second option komoot to find … END_OF_DOCUMENT_TOKEN_TO_BE_REPLACED 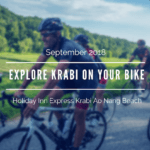 Bicycle Friendly Hotel in Thailand by Holiday Inn Express Krabi Ao Nang Beach. To inspire active lifestyle and unique experience while traveling. Set to launch Bike Friendly Hotel from September 2018, Holiday Inn Express Krabi Ao Nang is one of the pioneer hotels in Thailand to facilitate the amenities for bikers. This initiation marks the effort of the hotel’s management in providing the … END_OF_DOCUMENT_TOKEN_TO_BE_REPLACED 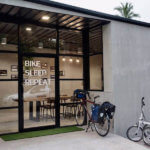 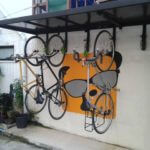 Urban Bamboo, a bicycle friendly hotel in Nakhon Ratchasima (Korat) Sometimes when I travel by bicycle in some unknown cities, I like to check in advance where I could sleep. After a long day, I do not want to spend so much time looking around for nice accommodation. A few days before my recent trip to Nakhon Ratchasima, also know as Korat, I checked on the Internet and found Urban Bamboo Hotel … END_OF_DOCUMENT_TOKEN_TO_BE_REPLACED 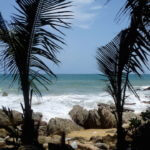 Day one - I’m not a planning cyclist.  Especially in Thailand.  Life is relatively easy in Thailand and, as a cyclist, quite relaxing.  Normally I just ride until I feel tired.  If a city is coming up rather than hurry to arrive I prefer to stay slightly out of town.  In Thailand, outside of Isaan I will look for a temple to sleep.  Extremely safe and comfortable.  In the north of Thailand, Lanna … END_OF_DOCUMENT_TOKEN_TO_BE_REPLACED 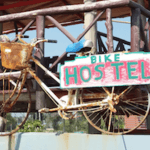 Touring cyclists who are traveling through the province of Prachuap Khiri Khan have a new accommodation option in the small beachside town of Thap Sakae. On a recent bicycle ride down the main beach road of Thap Sakae, I spotted an old bicycle sitting atop a wall with a simple sign attached. I pedaled through the compound gate to discover two newly built structures adjacent to a lovely lake … END_OF_DOCUMENT_TOKEN_TO_BE_REPLACED 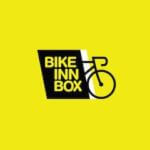 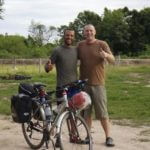 In January 2013 we posted an article about how to access and use the Warm Showers Community website because we liked the reciprocal hospitality concept of the website so much - 'The Warm Showers Community is a free worldwide hospitality exchange for touring cyclists.' We're proud to say that in early 2015 our webmaster, and frequent article contributor at BicycleThailand.com, Paul Hamon (with his … END_OF_DOCUMENT_TOKEN_TO_BE_REPLACED

I highly recommend cycling any of the four rivers paths in South Korea and have compiled details from my September 2016 trip along the Geumgang, Ocheon, and Buckhangang Bike Paths in order to help others plan their own adventure. On my trip I also used sections of the Hangang and Saejae Bike Paths. If you are interested in riding the four rivers path from Seoul to Busan you can read my other … END_OF_DOCUMENT_TOKEN_TO_BE_REPLACED 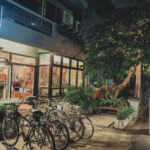 Spinning Bear Bike Shop - ร้านจักรยานหมีปั่น still exists but the Hostel is gone. Many touring cyclists traveling to Thailand start their epic journey by arriving in the country's capital city, Bangkok. The BIG MANGO (as Bangkok is commonly referred to by travelers) is world-renowned for its ability to immediately overload the senses of newcomers upon first arrival. Touring cyclists are … END_OF_DOCUMENT_TOKEN_TO_BE_REPLACED 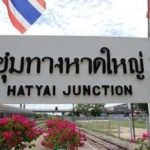 Hat Yai is a great start or end point to any cycling trip that involves a border crossing between Thailand and Malaysia. Getting you and your bicycle to or from one of the Thailand/Malaysia border crossings is as easy as booking a ticket on the State Railway of Thailand (SRT) southern line. If your cycling adventure has you crossing the Thailand/Malaysia border one of the better options … END_OF_DOCUMENT_TOKEN_TO_BE_REPLACED 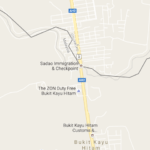 The city of Hat Yai is a short distance ride to or from the border crossing between Thailand and Malaysia. The city on the Thailand side of the border crossing is Sadao, while the city on the Malaysian side is Bukit Kayu Hitam. Regardless of whether you’re cycling plans have you entering or exiting Thailand, the city of Hat Yai, with its train station and good selection of nearby bike shops and … END_OF_DOCUMENT_TOKEN_TO_BE_REPLACED

Phitsanulok-Lomsak road or also known as the state highway 12, has been opened officially since the 12th of March 2016 by Mr. Arkom Tempittayapaisit, transportation and communications minister. This route is an important route because it is the East-West corridor from Myanmar to Vietnam. Starting from Myawaddy town, Myanmar passes though Mae Sod district, Tak province, Sukhothai province, … END_OF_DOCUMENT_TOKEN_TO_BE_REPLACED 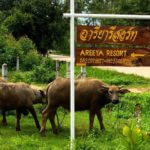 Many cyclists traveling from Cambodia to Thailand (or vice versa) at the Poipet (city on the Cambodian side of border) Aranyaprathet (city on the Thai side of border) border crossing may be interested to know about a little haven in the Sa Kaew province of Thailand called Ban Klong Sai. While Ban Klong Sai is a very quiet little village, the nearby Pang Sida National Park draws many visitors due … END_OF_DOCUMENT_TOKEN_TO_BE_REPLACED

ซัก - Wash อบ - Dry รีด - Press (Iron) Finding one of the MANY laundry shops in Thailand is quite easy if you learn to quickly recognize what their Thai language sign looks like. Luckily, EVERY laundry shop displays the same three Thai words on their roadside banner and/or shop window - Sak, Op, and Rit. Teach yourself to keep an eye open for this when riding along and you’ll be one step … END_OF_DOCUMENT_TOKEN_TO_BE_REPLACED 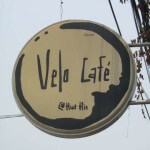 LIFE is Short. Drink good COFFEE. Ride good BIKE. And read good BOOKS. If a sign on the door of a cafe admonishing you to drink coffee, ride bikes, and read books doesn't get your attention then perhaps paying a visit to Velo Cafe @ Hua Hin might not be to your liking. I mean, who really wants to sip on a tasty coffee beverage (served Hot or Cold) while enjoying the chill atmosphere, not to … END_OF_DOCUMENT_TOKEN_TO_BE_REPLACED 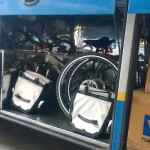 One of the frequent questions we get asked here at BicycleThailand.com is whether or not it is possible to transport a bicycle on Thailand buses. We addressed the query briefly in our Bicycle Touring Information series of articles, but felt the need to provide additional guidance since the question keeps popping up in emails and in our online Forum. In short, the answer is yes. Getting a … END_OF_DOCUMENT_TOKEN_TO_BE_REPLACED 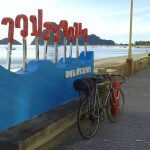 Let’s go out from the highway, follow the coast to the south by the small roads, enjoy to cross some fishing villages and lonely beaches and discover some really special place like a red sand beach! What else to do sometimes when you want to relax and discover some new place than take your bicycle and make a trip from one place to another? I just come back from Belgium where I get a new … END_OF_DOCUMENT_TOKEN_TO_BE_REPLACED

South Korea is a magnificent place to go on your next cycle touring trip. In less than a week a moderately fit cyclist with a minimal amount of equipment and planning can complete the route between South Korea’s two largest cities, riding southeast from Seoul to Busan, or northwest from Busan to Seoul. After checking the dominant wind direction I and my friend chose to cycle the Seoul to Busan … END_OF_DOCUMENT_TOKEN_TO_BE_REPLACED 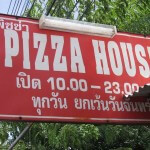 I recently went on a short, five day, cycling trip with a friend who wanted to show me some great routes in Kanchanaburi and Suphanburi provinces. Kanchanaburi is a great province, full of cycling opportunities, both on and off-road. And, if you stay close to Mueang Kanchanburi (Provinicial capital of Kanchanaburi) you have plenty of resort and restaurant options to meet most any tastes. But, when … END_OF_DOCUMENT_TOKEN_TO_BE_REPLACED 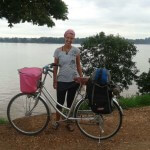 Travel by bicycle? Around one country or around the world. EVERYBODY can do it. People are always surprised when I explain my trip around Southeast Asia by bicycle. They ask if I really did it, especially after they see the bicycle I used. They say things like, "You rode around Southeast Asia on THAT Fu**ing bicycle?" I shrug these kinds of questions off. I know what I have done, and I know … END_OF_DOCUMENT_TOKEN_TO_BE_REPLACED 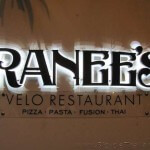 Finding a bicycle themed cafe in Thailand is not as difficult as it used to be; but finding a bicycle themed restaurant owned and operated by a true cycling fanatic is rare indeed. Ranee’s Velo Restaurant is just such a place. It wasn’t difficult for me to decide to pay Ranee’s a visit when I heard the restaurant’s menu boasts wood-fired pizzas, handmade pasta dishes, and fresh panna cotta. … END_OF_DOCUMENT_TOKEN_TO_BE_REPLACED 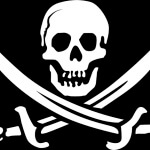 Touring cyclists and Pirates have a lot in common. They both appreciate free-spirited travel, are immensely devoted to their craft, and both carry a voracious appetite for hearty food and copious amounts of drink. If your cycling travels take you past the Thung Wua Laen Beach area, which is located just 15 kilometers north of Chumphon city, then I highly recommend that you make your way to this … END_OF_DOCUMENT_TOKEN_TO_BE_REPLACED 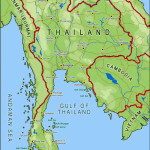 Recently, while eating at my favorite restaurant in Ban Krut, I was pleasantly surprised to meet two touring cyclists from London who were a couple of days in to a trip that would eventually deliver them to the popular tourist island of Phuket, in Southern Thailand. They had begun their cycling adventure in Bangkok and had chosen to ride south along what is commonly referred to as Thailand's … END_OF_DOCUMENT_TOKEN_TO_BE_REPLACED