Top
You are here: Home / How to / Transporting a Bicycle on Thailand’s Southern Railway Line (Hat Yai-Bangkok) 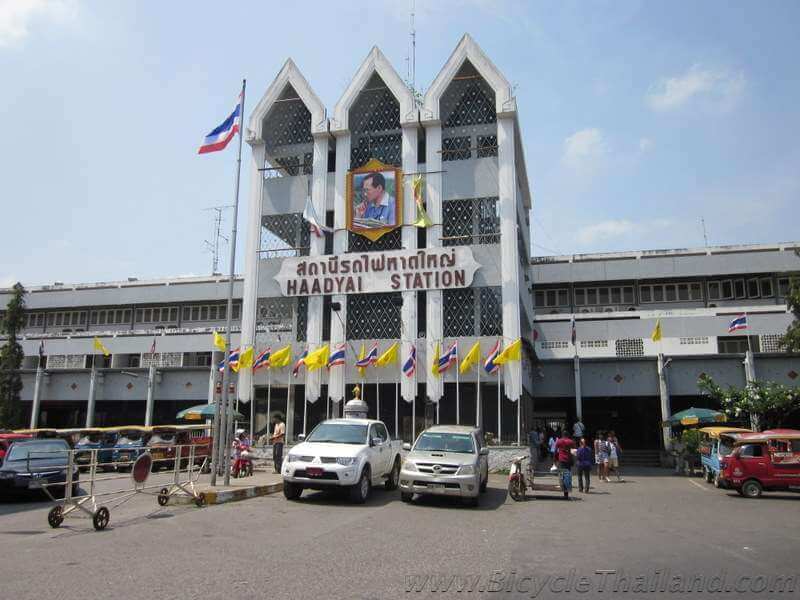 Hat Yai is a great start or end point to any cycling trip that involves a border crossing between Thailand and Malaysia.

Getting you and your bicycle to or from one of the Thailand/Malaysia border crossings is as easy as booking a ticket on the State Railway of Thailand (SRT) southern line. If your cycling adventure has you crossing the Thailand/Malaysia border one of the better options available to you is to make use of the train station in the southern city of Hat Yai, located in Thailand’s Songkhla province.

Some people ask whether they can catch a train in Malaysia that crosses the border into Thailand and vice versa. And the simple answer is yes, as Butterworth station in Malaysia is the start/end point of the same southern rail line that passes through Hat Yai. But, I advise cyclists against getting on any train south of Hat Yai since first class cabins (Air-con sleepers), cargo/oversize baggage space (where your bicycle needs to be), and restaurant (better than airline food) carriages are added to trains only AFTER they have reached Hat Yai on their Bangkok-bound journeys.

First off, you will need to decide on your travel date and time and then proceed to the station to purchase or prebook your passenger train ticket.

My personal favorite is the Special Express train as they offer 1st class sleepers, cargo and restaurant carriages, and their departure times make them overnight trips so you can arrive to your destination well rested. Each first class sleeper compartment can accommodate 2 occupants, but if you purchase the ticket for the bottom bed and pay an additional 500 Thai Baht you will be given the whole compartment.

Second, get you and your bike to the train station approximately one hour before time of departure. At the Hat Yai train station there is a main entrance that leads directly to the ticket window sales area and out onto the train platforms. To the right of this main entrance area is a cement ramp where you will notice passengers exiting with large parcels and possibly even motorcycles. This ramp leads directly up onto the train platform area where cargo and oversized baggage is collected, weighed, and loaded on trains. After pushing your bicycle up the cement ramp and arriving on the train platform you will be standing in front of the cargo office. It’s easy to recognize because it has a large amount of cargo directly in front of it and a nice (or not so nice) Thai lady sitting at a desk just outside of the glassed-in office. Enter the cargo office and tell them you have a bicycle (pointing to the bicycle parked just outside their office window works just as well as speaking fluent Thai). You will need to show your train ticket and tell them where you will be getting off of the train (Bangkok, Hua Hin, etc.,).

That’s it. Once your bicycle has been added to the cargo to be loaded queue you can leave it and await the boarding call for your train. As mentioned before, it’s a good idea to arrive approximately one hour prior to your train departure time in order to allow for sufficient time to get your bicycle cargo ticket all sorted. Unfortunately, it is not possible to prebook a cargo ticket for your bicycle, even though you can purchase your passenger ticket weeks in advance.