Top
You are here: Home / How to / GPS Devices Make Cycling in Thailand More Enjoyable

A GPS (Global Positioning System) device is becoming an essential accessory for more and more bicycle riders in Thailand.

A GPS designed for biking or trekking uses the same satellites as the satnav in a car but the way it uses the information is quite different.  Typically a satnav just tells you the fastest or shortest route to your destination, whereas a GPS can do this and a lot more.  Most usefully it keeps recording where you are and builds up a track of your movements.  Also, you can mark the start of your trip as a waypoint, and then later when you’ve got lost the GPS will help you navigate back to the start. Afterwards the track and waypoints can be copied to your PC and saved for a later date when you want to follow the same trail, at which time you can transfer it back from your PC to your GPS.  As the track is just a PC file it can also be uploaded to the Internet to be shared by anyone who is interested in riding the same trail.

The information recorded in a track includes the precise position and time, the speed and direction of travel, and the elevation.  Some GPS models include a barometric altimeter but on more basic models the elevation is determined quite satisfactorily from the satellites.  Similarly a magnetic compass is an unnecessary feature as the direction is determined from the satellites as soon as you start moving.

Though there is a wide choice of satnavs for cars, the range of GPS’s for cyclists is far more limited and more expensive because of the smaller market.  The most popular brand in Thailand is Garmin, though the author is also aware of a few riders who have Magellan devices.  Garmin have four ranges of GPS’s suitable for cyclists.

The eTrex range has been around for a long time, but Garmin have recently announced some new models in this range.  The Oregon range offers the same features as the eTrex range, but has a larger touch screen display, and the GPSMap 60 range is a more rugged range.  The Edge range has built-in cycling specific features. All of these use a pair of AA size batteries.  Rechargeables work well, though some users have found the touch screen of the Oregon range runs the batteries down quickly. 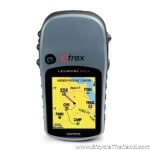 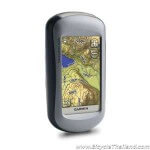 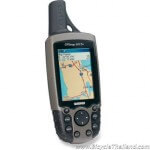 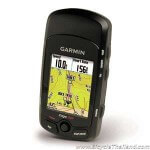 Most models in these ranges now come with an industry standard MicroSD card on which to store maps, and it would be short-sighted to buy one without a MicroSD slot.  The GPS will find your position wherever you are in the world, but that only becomes meaningful when you can see that on a map.  Maps are expensive, though if you buy a Garmin GPS in Thailand it will come with a pre-loaded detail map of the country, which shows a lot of dirt tracks as well as roads.  Otherwise you can buy Garmin maps by downloading them from the web, or on a MicroSD card.  For Thailand and some neighbouring countries City Navigator Southeast Asia NT is a good buy, but it costs around USD100.  For the technically adept a library of free GPS maps is available at http://rotweilermaps.com/.

On your PC you need software such as Garmin’s Mapsource to transfer the tracks and waypoints to and from the PC, and make adjustments to your tracks.  For example, if you took a wrong turn and had to turn round that section of the track can be removed using the Mapsource software.

It is really useful to have a bicycle handlebar mount for your GPS, which though expensive for the simple piece of plastic which it is, allows you to see the screen at all times and ensures the device has a clear view of the satellites.

In Thailand Garmin GPS’s are imported by ESRI, who provide a good repair service for units they have sold.  Most of the bigger IT malls across the country have at least one shop selling GPS’s.  Generally they can be purchased a lot cheaper overseas, but then you will have the expense of buying a map of Thailand for it.