(Editor’s choice of headline for this article: How the Bangkok metropolitan council has wasted 28 million baht in 9 years by not researching how or why to build bicycle lanes in a large city) 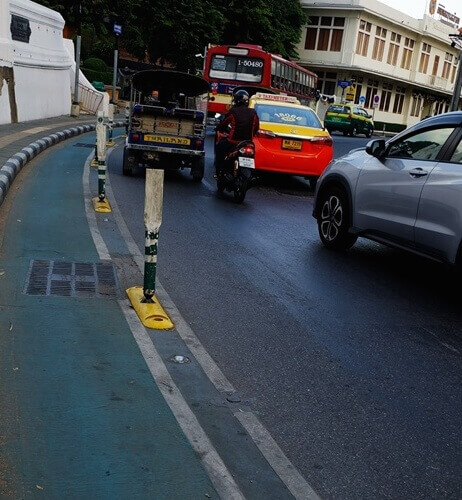 The bicycle lane project in Bangkok started in 2008 and was built as a gift for people in Bangkok 3 years ago. The project name was “Bicycle lanes in Rattanakosin Island area development project”. It was a rushed build because it was meant to be completed by 2015. This project was well supported at the time and Bangkok planned to expand with more than 48 bicycle lanes for a total distance of 230 kilometers throughout the city.

However, most of the cyclists don’t use “Bangkok bicycle lanes” because bicycle lanes have become places where people ride motorbikes or where the police put no parking signs, causing them to be dangerous.

Bangkok metropolitan council accepts that there are problems with the bike lanes and people use them in the wrong purposes such as, parking their vehicles, setting up food stalls and riding motorbikes. These problems make the cyclists afraid to use bicycle lanes because they are concerned about safety.

Bangkok metropolitan council reported to the reporter that they haven’t ignored dealing with the complaints and they ordered police to pay more attention to the bicycle rider’s rights. At the same time they also ordered all related organizations to publicize to people to follow the rules and put warning signs like “do not sell” or “do not ride motorbikes on bicycle lanes”, “violators will be fined 2,000 baht”.

“It is not easy to solve all these problems because we can’t keep an eye on bicycle lanes all the time. The main thing is getting people to follow the traffic rules which is more difficult especially in our society.”

Bangkok metropolitan council also reported that “getting people to follow the traffic rules is out of control, but they are confident that every problem will be solved more or less.” 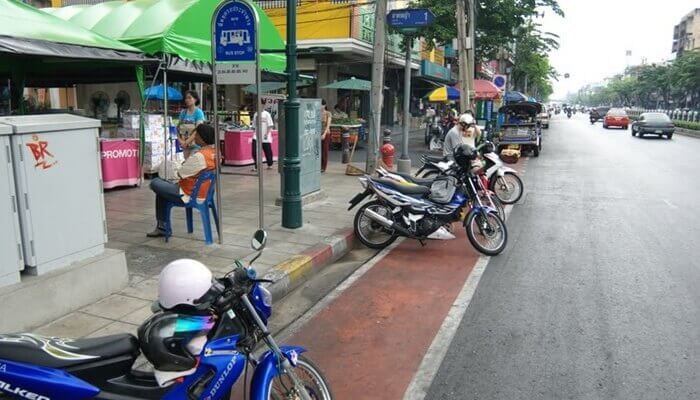 Traffic poles should not be installed on bicycle lanes

Mr. Mongkol Wijarana, president of Thai Cycling for Health Association (TCHA) said that the main source of Bangkok bicycle lane problems exist because Bangkok metropolitan council did not study enough before building the bicycle lanes at locations where the sellers set up their stalls. Mr. Mongkol Wijarana said, “We can’t only blame these sellers for the problem because it is their occupation and people in Bangkok get used to this way of life. Bangkok metropolitan council should prepare places for sellers to set up stalls and control the amount of vehicles on the road. They can also set up vehicle buying rules. This would mean people wanting to buy a vehicle must have a parking space allotted for every vehicle purchased. They should be strict about the traffic rules so these problems can be solved more quickly.”

Mr. Mongkol also gave an example of a bicycle lane on Phra Artid Road where there are traffic poles set up between bicycle lanes and other vehicle lanes which are inappropriate. It is because people can’t park their vehicles near the footpath so they park next to the bicycle lane. This causes traffic jams and accidents, especially in the merchant’s community area. 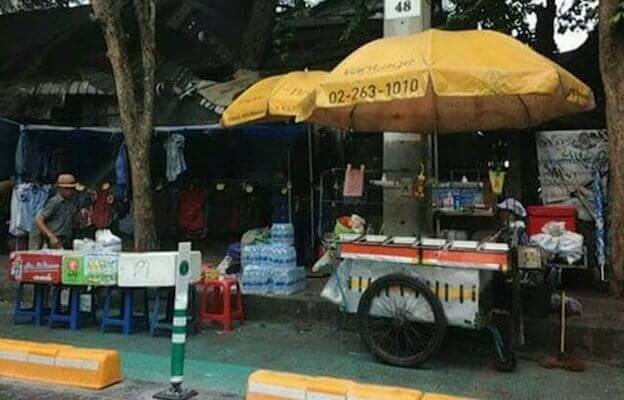 Good bicycle lanes must be connected with public transportation

Dr. Wiroj said that good bicycle lanes must be connected with all routes between communities and have distances that are continuous, going for 2-3 kilometers.

He also said that Bangkok metropolitan council should focus on developing the bicycle lanes to be connected between communities for people to use in daily life and not to focus on expanding the distance or amount of bicycle lanes. Connection routes are very important such as junctions, underpasses, overpasses, and bridges have to provide a continuous route otherwise it can put people off from using the bicycle lanes. In addition, there should be more parking areas for bicycles, especially at public transportation stations because it influences people to use bicycles more. 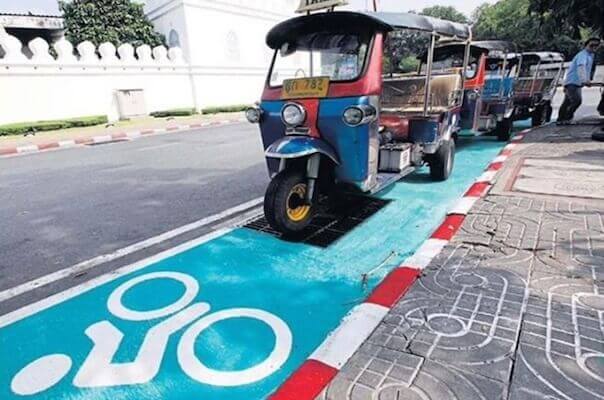 Bangkok metropolitan council has been requesting the budget from the government to build more bicycle lanes each year, even with many problems occurring. They did not care about the warning from the office of the auditor general of Thailand that requested them to reconsider the bicycle lanes building and development around Bangkok project after they found that it is not actually useful.  Also, Bangkok metropolitan council wasted the budget of 28 million baht for an unsuccessful project.

Mr. Pisit Leelawachiropat, governor of the office of the auditor general of Thailand confirmed that they gave an official letter to the chairman of the Bangkok metropolitan council to reconsider the bicycle lane project.  They explained it is not wrong if they don’t reconsider their future projects but if there any mistakes, it will be the Bangkok metropolitan council’s sole responsibility. 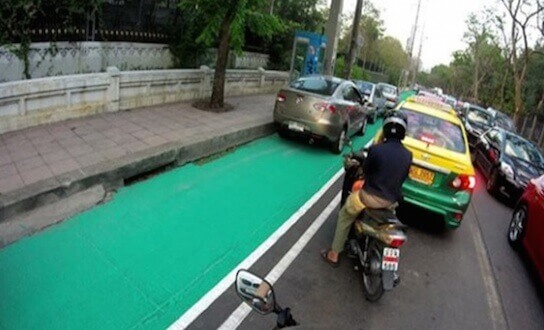 Mr. Pisit Leelawachiropat also said, “The office of the auditor general of Thailand had concerns about using the budget of 28 million baht and whether this amount was really appropriate or necessary. The bicycle lanes in many areas are built but are not being used because of many reasons. Bangkok metropolitan council should reconsider before starting additional bicycle lanes projects.” 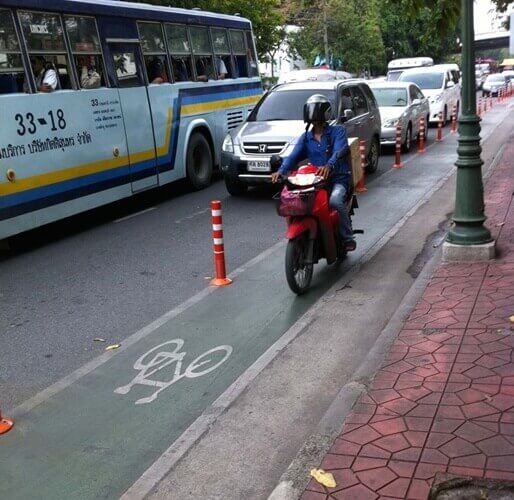 Investigations into Bangkok bike lanes that cause traffic jams
Plans to cancel bike lanes in Bangkok and enforce laws
To Build or Not to Build: Bicycle Lanes Should Solve a Problem
20 Million Baht Bicycle Route Project in Chiang Mai
How will Thailand and its Big Cities Deal with Increase in Cyclists?
Bangkok bicycle rentals to ‘ease traffic congestion’