Top
You are here: Home / News / To Build or Not to Build: Bicycle Lanes Should Solve a Problem 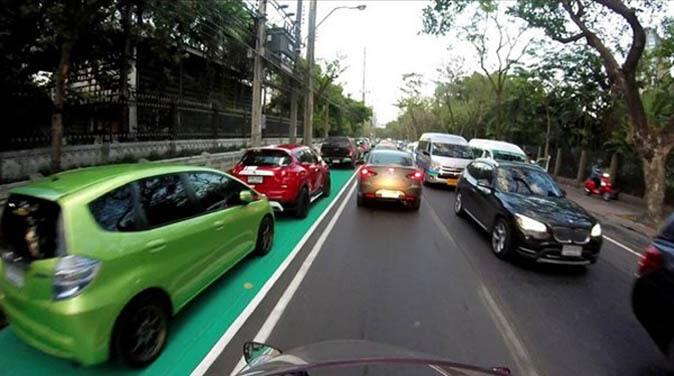 At the beginning of the month several posts on social media sites brought attention to the fact that the newly finished bicycle lane (completed in April of 2016) in the Chatuchak area of Bangkok had been taken over by food vendor carts, tuk-tuks and vehicles. Photos of parked cars, tuk-tuk taxis and food stalls occupying the bicycle lane went viral and drew responses from several commenters who shared various opinions about the bike lane. 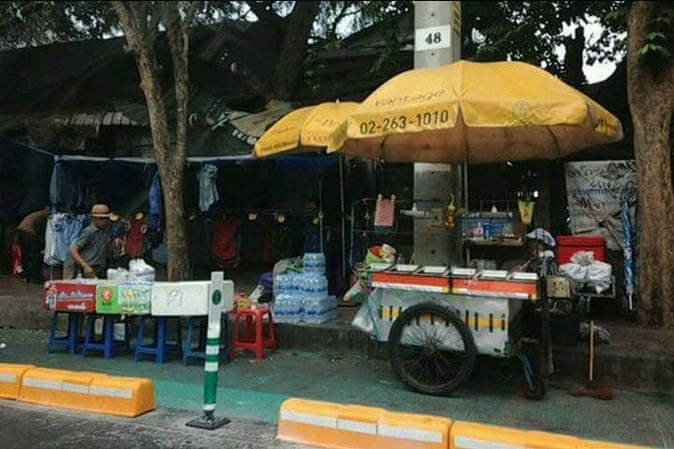 Some social media comments point to the fact that the road, which is very narrow, where the bicycle lane is located has always served as a parking area for visitors to nearby JJ Market and provides a space for many street food vendors on busy weekends.

“The road is very busy and there have never been many cyclists who used it in the past.”

“Cyclists do not need their own lane here. The bicycle lane eliminates many parking spaces that are needed for the market.”

“The street vendors were here first and then cycling lanes were added when cycling became a fad in the city.”

Other social media comments, mostly from Bangkok cyclists, reveal frustration with the misuse of the bicycle lane by vendor carts and motor vehicles while other comments alluded to the uselessness of the new lane.

“It is not possible for bicycle to use this lane when have too many cars parking lot here.”

“Is it just a waste of money to make a bicycle lane here? I can think of better place to ride my bike.”

“Even if the bicycle lane can be used here, there is still no place for bicycle to park safe at the market.”

In a city full of the hustle and bustle of everyday life perhaps any unused space, regardless of its designation, will inevitably be occupied by something or put to use by someone. A short walk along any road in Bangkok immediately reveals how sidewalks, footbridges, and even business frontage areas are all susceptible to what can be best described as city creep. No void remains too long. An empty bicycle lane is no exception. 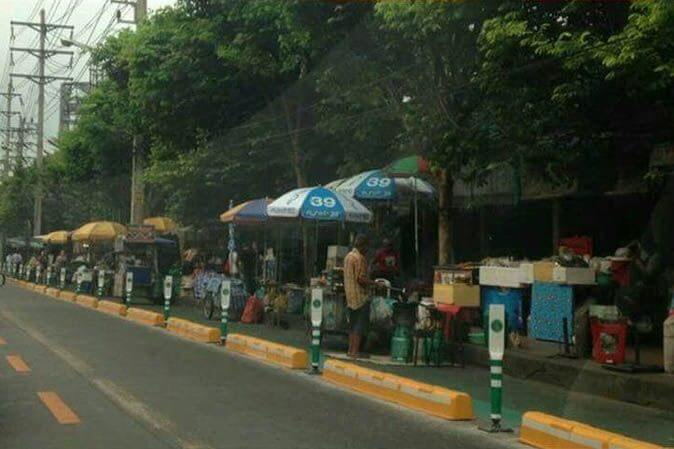 Recognizing that there are unique factors that exist in Thailand’s capital that make creating successful cycling-related projects a bit more difficult than in other locales it is still important for project planners, community groups, and cyclists to remain focused on advocating and constructing projects that actually solve an existing problem.

So, the question is – Was there a problem on this road that required a bicycle lane to be created?

To answer that question, and others associated with successful bicycle infrastructure planning, one could draw from some or all of the ideas listed below:

Start small and be willing to accept failure, but learn from mistakes.

Does the bicycle-related project solve a problem?

Organized Cyclists – Create the infrastructure you need or provide input to planners.

Models of success: Remind yourself and others of the many successful projects.

that I now make use of on a daily basis is the bicycle lane stretching from Hua Hin city south to an area known as Khao Tao (Turtle Mountain), a distance of just over five kilometers. This new bicycle lane has been constructed completely separate from a dangerously busy section of Highway 4 (Phetkasem Road). I had ridden this dangerous stretch of Phetkasem Road over the past 7 years and was personally witness to the rise in use of this stretch of the highway by large buses, trucks, and vehicles. Fatalities (mostly motorcycle) steadily grew over the years as well and because of these deaths a nearby university became instrumental (along with the government body overseeing the construction of the Rajabhakti Park) in having separate lanes built on both sides of the busy highway to facilitate bicycle and student motorbike use. 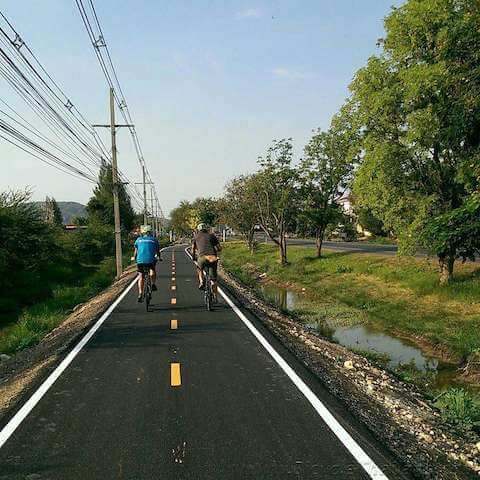 The construction of this new bicycle lane has directly addressed a specific problem and given a safe transportation solution to students of the University as well as local and visiting cyclists. 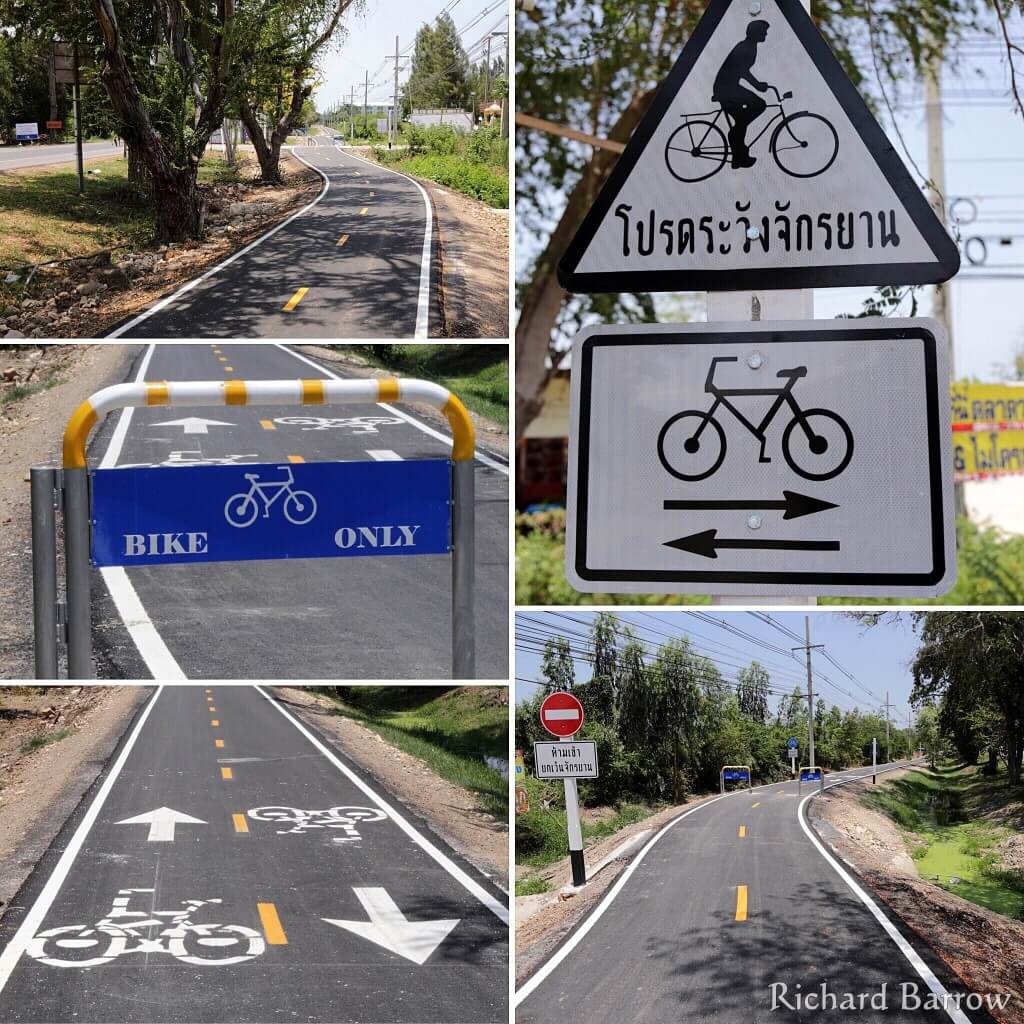 The Chatuchak road bicycle lane is a failed project and no amount of enforcement will reverse the actions of those food stall vendors and vehicles that use the road as a parking lot. All considerations that should have been initially recognized prior to painting the lane on Chatuchak road will hopefully serve as a learned lesson for future bicycle-related projects. What are your thoughts? Comment below or send us an email to Info@BicycleThailand.com