Top
You are here: Home / How to / Track Bicycle Racing Explained

Watching cyclists battle through the fast straights and high berms of a velodrome event makes for quite an exhilarating experience for competitors and spectators alike. Conversely, understanding the many different types of races that make up the sport of track bicycle racing can be rather confusing. 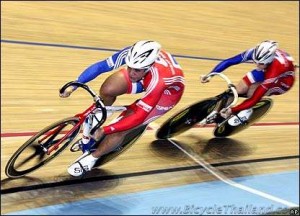 Making sense of the mayhem begins with an explanation of how the different races are set up, with regards to the number of riders and or teams on the track, and how each race is scored. Here is a breakdown of the five most common types of track bicycle races that are held at velodrome arenas.

Track sprints are an exercise in strength, speed, and tactics. These events can be in lengths from 600meters up to 1,000meters. The length is dependant on the size of the velodrome. Regardless of the length of the event it is only the last 200meters that is actually timed. Two opposing riders circle the track, pedaling slowly and periodically coming to a complete stop, displaying great track standing skills, in order to force their opponent into the unenviable position of lead rider. This cat and mouse dance goes on until the last 200meters when one rider has been forced into the lead position and the other rider slips into the position directly behind, utilizing the draft of the lead rider. The pair then turns on the speed and heads for the finish with the trailing rider in hopes of moving out from the slipstream of the lead rider and making a final mad sprint for the finish at the end.

This event awards points for winning sprints. The riders must have stamina, speed, and most of all, tactical awareness. Sprints for points will occur on every 10th lap of the event. Events are always an amount of laps that is a multiple of 10 (i.e. 40, 50, 60, etc.,). The first four riders across the sprint line on the 10th lap will receive the following points according to their position: 5, 3, 2, and 1. The points accumulate over the event and riders must remain aware of their point position and budget their remaining ability to ensure a win. A rider can earn an extra 20 points if he laps the entire field of riders. A rider can also lose 20 points if he falls behind the rest of the riders by a lap. If at the end of the event two riders have the same amount of points whichever rider had the better position on the final sprint is named the overall winner.

This is one of the more popular velodrome events enjoyed by spectators. It is a team event and it is named after the hugely successful six-day race events held at New York’s Madison Square Gardens venue from 1899 on. 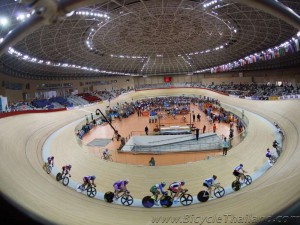 Each team has two riders who work together to gain points for sprints. Sprints occur every 20th lap of the event. What makes this event unique is the manner in which the teams must conduct the race. The race begins with all team members on the track but after the first lap only one member from each team is allowed on the track at a given time. When a team wants to replace their rider the new rider circles the velodrome high on the banking wall until a changeover can occur. At the changeover, which can be quite dangerous, the two riders grasp hands and the old rider passes on his momentum to the new rider in slingshot fashion. The points scoring is similar to a Points race event but traditionally a Madison event is much longer, and much more dangerous, which explains the spectator appeal of this particular type of event.

Team pursuit is by far the type of race that requires the most tactics of any track cycling event. Two opposing teams compete against each other, starting out on opposite sides of the track. Teams are made up of four members each. Each team circles the track as a pack, the lead rider setting a brisk yet manageable pace so as to not prematurely tire his team. The goal of this type of race is for a team to record the fastest lap time before the end of the race or, if possible, to catch the other team (difficult to say the least). If one team catches the other team then the race is ended, regardless of the distance ridden.

An Individual pursuit is similar in every way to the Team pursuit except that two individuals, rather than two teams, begin the race on opposite sides of the track. Each rider tries to record the best time for the overall distance of the race but, once again, if one rider is able to catch the other then the race is ended, regardless of the distance ridden.

There are no teams in Keirin racing. It is a ferocious, full contact, sprint fest that sees frequent crashes. Perhaps this is why Keirin is THE track race event that draws more gambling spectators than any other velodrome event. In Keirin races there are as few as four and as many as ten sprinters riding for a distance of 2 kilometers. If the velodrome is a 250meter track they will do eight laps. If the velodrome is 400meters they will ride five laps. The race is determined in the last 600-700meters when the racers are moving along at 50km/h + speeds in an all out pedal mashing assault to the finish line. First rider to cross the finish line is the winner. Keirin is the velodrome event that most closely resembles horse racing, with far more crashes.