Top
You are here: Home / Races and Events / Tour of Thailand Competition Scheduled for April 2018

Tour of Thailand Competition in April Next Year 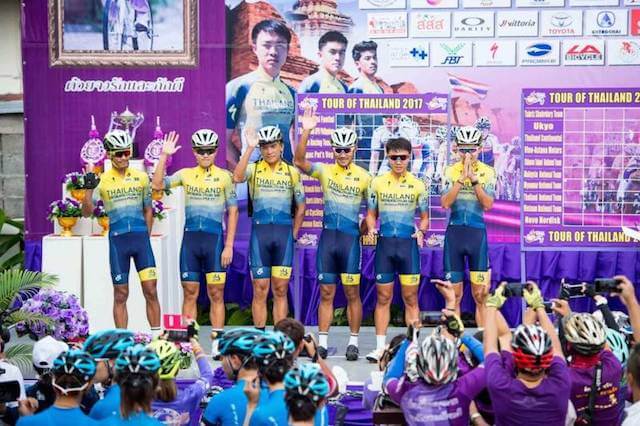 “Seh Meuk”, Genaral Decha Hemkrasi, president of Thai cycling association said that they have been preparing the “Tour of Thailand 2018” for 1 year. They want this competition to be as successful as possible. They have already completed the routes for this competition.

There are 6 stages of the male category for the total distance of 1,062 km as below.

There are 3 stages of the female category for the total distance of 296 km as below.

General Decha said that the routes of male category are planned around the main tourist destinations of Thailand. The first day of this competition will start in Pattaya where there are many popular beaches. The cyclists will pass some important roads along the way such as Chaleam Burapa road which is surrounded by beautiful scenery. Stage 3 for male category is the most important stage because the cyclists have to ride up the mountains in Kho Yai national park to the finish point. Kho Yai national park is one of the most important tourist destinations in Thailand.

Union Cyclist International (UCI) elevated this competition in 2018 to be level 2.1 from level 2.2 as they see that it is a standard competition, well organized with a high level of safety. The advantage of the race being a level 2.1 is that Thai cyclists will get more points from the “Tour of Thailand” competition.

Mr. Thanawut Sanikawatee was the winner of stage 3 and got the second place of stage 2 for this competition last year. Miss Phetdarin Samarat was the winner of stage 3 for the female category and another team member got good points also. This increased the reward points of the Thai national cycling team and got them into the world’s top 20. Seh Meuk also said that Thailand has a good chance to increase its reward points and qualify for the Olympic Games in Japan in 2020.