Top
You are here: Home / Races and Events / Tour of Friendship 2012

Stage 1 of this year’s Tour of Friendship (R1) took place on Utayan Road near Mahidol University, West of Bangkok. The 7 kilometer circuit saw individual and team competitors from Singapore, Hong Kong, the Philippines and Thailand. Individual racers were released in 30-second intervals to tackle the 7 kilometers in the shortest amount of time. The day’s heat, reaching nearly 38 degrees Celsius, was definitely a factor for all of the racers. This year’s Tour of Friendship boasts nearly 200 riders in total. The largest category of riders is the Men’s 40-49 age group competitors, which has approximately 70 riders.

Martin Brot, owner/operator at Siam Bike Tours Phuket, had the best time in the Men’s 50-59 age group category with a time of 10 minutes 15 seconds. Stage 1 also saw a great performance from India’s Naveen of the newly formed Specialized/KYNKYNY Cycling team. Naveen was the best placed rider in the Men’s junior category with a time of 10 minutes 17 seconds. Keep an eye on this team in future stages and races as they’re super keen to give their new sponsor plenty of podium finishes. Siw Haller of team Anza had the best time of the ladies’ category with a time of 10 minutes 34 seconds on the 7 kilometer course. Best time from the Men’s Master category was Junichi Arao of the Neilprydre Japan team. Junichi’s time was 11 minutes 11 seconds atop his Neilpryde bike. Neilpryde is the main sponsor and coordinator of the Tour of Friendship, taking possession of the race last year in 2011. We wish Neilpryde all the best and hope for their success and the success of future installments of the Tour of Friendship in Thailand.

Tomorrow’s stage will start in Nonthaburi and head West to Kanchanaburi province, finishing just North of the provincial capital city of Kanchanaburi.

This year’s race is being tracked by Champion Chip Timing Solutions and all race results can be found at their website link below.

Today’s second stage of this year’s Tour of Friendship was a flat and extremely hot route of 120 kilometers, starting in Nonthaburi and cycling through central Thailand towards its Western border with Burma. The stage finish was located just North of the provincial city of Kanchananburi. Temperatures during the day reached a high of 43 degrees Celsius and that extreme heat definitely took its toll on the riders. During the stage only a few small breakaways formed but were quickly recovered, more so out of the reluctance of the breakaway than any determined chasing by the pack. Teams seemed reluctant to push the pace of the ride as the temperature soared.

Winning time at the finish was 2 hours 32 minutes and 51 seconds. The finish ended up being a bunch sprint with a majority of the field receiving the same time as the winner. The first group was massive with about thirty to forty riders. The second group to finish was just under 2 minutes behind and finished as a bunch, all receiving a time of 2 hours 34 minutes and 38 seconds. The last large bunch group came in at 2 hours 38 minutes and 56 seconds. Because of these bunch finishes not many changes occurred in the general classification standings.

Tomorrow’s stage 3 is the first of the mountain stages and promises to be another scorcher. Much of the day’s action is expected to come from the teams who will use their numbers to shake up the GC standings. Watch teams like Confero Mavericks, Cannasia=Cannondale, and Specialized KYNKYNY Cycling to set the pace in order to keep their current position or propel their riders up the standings.

The 3rd stage in this year’s Tour of Friendship started off with a bang, each rider looking to be finally acclimatizing to the heat or simply wanting to ride faster to get any kind of relief the wind could afford them. As promised it was another scorcher of a day. Today’s stage was the first stage of the race with points up for grabs in the king of the mountain competition.

As expected the Confero Mavericks, Cannasia=Cannondale, and Specialized KYNKYNY Cycling teams set much of the pace for the day’s race, with riders from each team creating the first break of the day. DirectAsia.com team rider Matthew Kenfield was also in the break. The break continued to gain time after a few crashes in the peloton slowed its pace. There were a few attempts by riders to jump the gap to the lead group but none proved successful.

Tomorrow’s stage will be a flat and fast 85km ride with a steep climb finish. Oh… and it will probably be really hot.

Stage 4 goes to Matt Kinch of the Confero Mavericks team, and boy did he deserve it. Kinch warmed up his legs in the first 5 kilometers of today’s stage and then decided to see what kind of food was being served at the finish line and he certainly wasn’t waiting for anyone else in the peloton as he rode a solo 80 kilometers to finish first across the line. Chalk up a performance like that to Kinch’s tenacity and the peloton’s attempt at recovery from yesterday’s extremely hot and brutal ride, which included tough climbs.

The best feature of the day’s racing, aside from Kinch’s ride, was watching the entire peloton arrive and ascend the one and final steep climb to the finish. Fredrik Croneborg (Thanyapura) used the opportunity to add more time to his lead by cranking up the climb and finishing second just nipping in front of team Specialized KYNKYNY Cycling team’s star Lokesh Narasimhacher. Fredrik Croneborg is in the yellow jersey and looks to be in great position to keep it with over a minute and a half lead in the GC.

Tomorrow’s stage is the 5th and final stage of the Tour of Friendship (R1) 2012. The course is flat and fast. 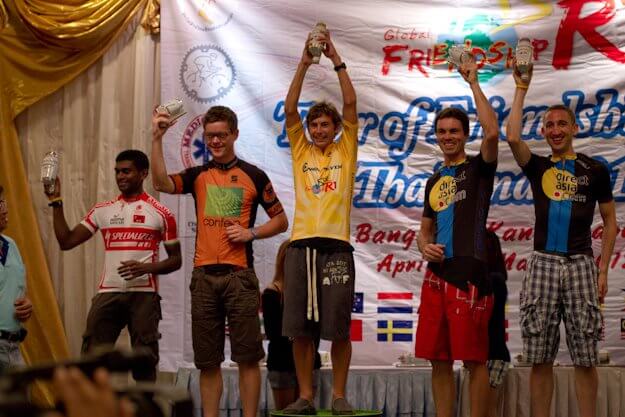 The Tour of Friendship (R1) 2012 was held from April 28th until May 2nd. The 5th and final stage of the race continued the excitement of the race long, hot 120 kilometer day came down to a sprint finish between Matthew Kenfield of the DirectAsia.com team and David McAdam of Cannasia=Cannondale. At the line, McAdam took the stage win by a wheel. Fredrik Croneborg (Thanyapura) won the race’s Open Category and kept the yellow jersey he had donned days before. Mark Cook of DirectAsia.com took 2nd in the Men’s Open GC while Lokesh Narasimhachar of the Specialized KYNKYNY Cycling team scooped up 3rd. Congratulations to all riders and teams for another great Tour of Friendship. See you all next year.

Read the press release for the 2013 Tour of Friendship here – http://bicyclethailand.com/tour-of-friendship-r1-2013-bicyclethailand-com-press-release