Top
You are here: Home / News / Thai man living in Malaysia rides his bicycle from Penang to Bangkok to pay his respects to the late King Bhumibol Adulyadej

Thai man rides bicycle from Penang, Malaysia to pay his respect to the body of the late King Bhumibol Adulyadej.

A Thai cyclist, Mr. Toedsuk Attarangsun, age 50 years old who lives in Penang, Malaysia rode his bicycle from Malaysia to the royal plaza in Bangkok, Thailand. His ride began on the 16th of December 2016 and completed on the 26th of December, 2016 for a distance of 1,250 kilometers. Mr. Attarangsun did this ride to pay his respect to the body of Thailand’s late King Bhumibol Adulyadej. 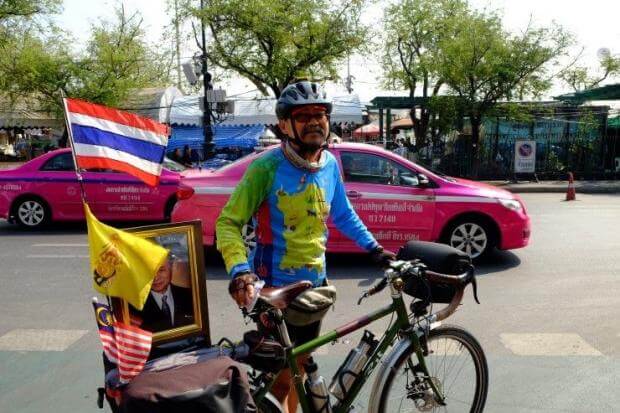 He said that he has lived in Penang for 10 years since 2006 to look after his family. His wife received a scholarship from Mahasarakham University to study a doctoral degree in Penang and his daughter attends a high school in Penang. He said his family and other Thai people in Malaysia were very sad after hearing the news about the passing of His Majesty King Bhumibol Adulyadej. They showed their condolences and expressed their grief for the passing of the king at Thai Embassy and consulates in Penang only because they did not have a chance to travel to Thailand.

As Mr. Attarangsun is a Thai person and his wife received her scholarship on behalf of the late King Bhumibol Adulyadej, he appreciated the royal grace that has always supported Thai people in everything such as education, sports, living and other areas. He decided to ride a bicycle from Penang to Dusit Maha Prasat Throne hall, Bangkok as he loves cycling and wanted to show his condolence for the king in person.

Along the way of his journey, he slept at temples at night and he received support of food, drink, and money from local people. He informed people who gave him money that the money would be presented as an act of charity to His Majesty the king at Dusit Maha Prasat Throne Hall. Those people who donated funds were happy because they did not have a chance to travel to Bangkok themselves to present such a gift.