Bangkok, the capital city of Thailand, has begun a new bicycle share program which loosely mirrors similar programs featured in prominent cities throughout the world. These type of programs provide rental bicycles at reasonable rates to daily users in an effort to encourage the use of bicycles, rather than cars, for short distance and quick errand trips in popular yet congested city areas. The Bangkok program has been dubbed the “Pun Pun Bike Share Program” and began with the introduction of its first two, of a planned fifty, stations at the end of October 2012. Each station holds eight bicycles and when all fifty stations have been completed, Bangkok will be served by a fleet of 400 rental bikes. 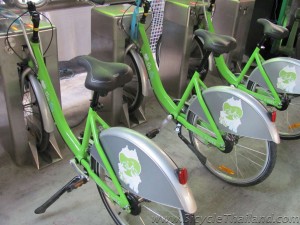 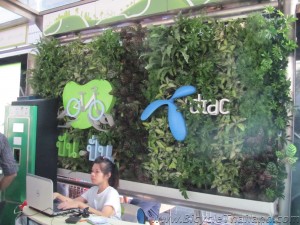 BicycleThailand.com recently visited the Siam Square station to get a run down on how exactly the process of renting a bicycle from the Pun Pun Bike Share program works.

Although the program’s website (www.punpunbikeshare.com) and pamphlet (which is available at the bike share stations) are currently only in Thai language, the process is fairly simple to figure out and there is a growing base of English language information about the program on the related FaceBook page at www.facebook.com/Punpunbikeshare

How to rent and return a bicycle at any bike share program station:

*Bicycles are intended for a maximum of one day’s use. Overnight and multiple day rentals are prohibited. Bicycles MUST be returned to a bike share program station prior to closing. Staff will telephone you at your registered phone number to remind you of this if you have a bicycle in your possession and it is approaching the closing time of the bike share program station (8pm). Any bicycle that is not returned will incur a 500 Thai Baht (per day) penalty fee to the member card which was used to rent it.

While the initial offerings of only two stations equipped with 16 bicycles seems a bit limited to counteract the behemoth traffic jams of Bangkok, or to launch the city into the top spot on next year’s “Best Cycling Cities of the World” list, the admitted ‘pilot phase’ of this program does at least exhibit the city’s willingness to investigate and invest in alternative methods of transport for its citizens. And because of that, we here at BicycleThailand.com do hope that this program proceeds and succeeds.