Apart from cycling city, let’s look now at this on a smaller scale. Then university is one of the places where many people gather and spend their lives together. It is like a city where a certain lifestyle can be created. Building a cycling city in the university requires cooperation from the majority of people within the university. However, these people come from different places, so there must be certain measures to make the people accept the new lifestyle.

Many universities have started to turn themselves into Bicycle Universities such as Thammasat, Chulalongkorn, Rangsit or Bangkok University, or even Kasetsart and Mahidol University where the “cycling in campus” campaign initiated. Now, it seems that Mahidol is the only university with the most tangible success.

Mahidol University, Salaya Campus is located quite far from the city and it is not a downtown university with many choices of public transportation. In the past, there was only one bus running to Salaya. The campus has been around for 36 years with an area of 1,240 rai, which is considered a very big campus. Most of the area was filled with trees and empty spaces, the roads being gravel roads. Classroom buildings were far apart from each other. Students needed to use the bicycle to get on to the different places within the campus. 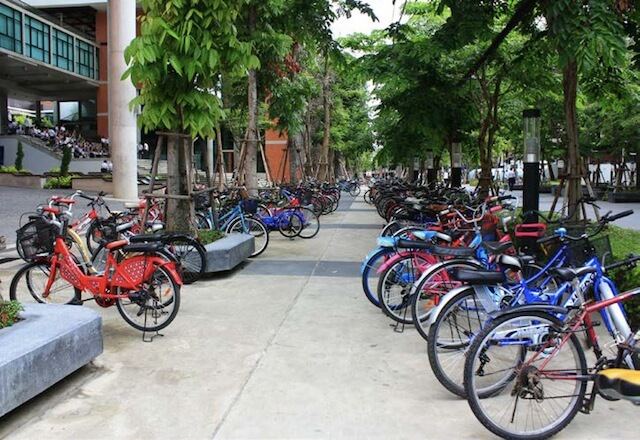 Until the year 2008, Mahidol Salaya had a new board of directors, the dean was Professor Dr. Piyasakon Sakonsattayathon. He had a plan of physical improvements for the campus, from the infrastructure to planning the new over all master plan. He wanted to make the campus more appealing as well as using the empty spaces as efficiently as possible. Also, he wanted to keep the same lifestyle for students so he initiated a project called “Mahidol’s Cycling for Better Being”.

“When we started the first phase in front of the Dean’s office, there were some opposing voices but the Dean wanted to make it happen since he believed it would be good for the university and he was right. The project really helped out the university, if the project was suspended back when there were people opposing to it, we would not see the achievement today. Many universities have come to Salaya to study the project, asking how they can do it. We said the most important thing is the leader. If the leader puts something as the priority, that thing will get the most attention. If he/ she says bicycles are the most important things for the university, they will get the first priority but if he/she says cars are the most important then we would need to build more roads and parking lots. It will go on and on endlessly.”

“Originally, we did not plan for it to be a bicycle project. We only thought of making walking paths and that the paths need to be bigger than or as big as the driving lanes. We wanted to promote well-being and good health so we need to show our priority through our making of the roads inside the campus.”

“Before we could get the space back, we had some problem with the people who parked their cars in the spaces and those who conveniently just park their cars and go straight to their classroom building. There were about 2,000 cars, where could we send them? We could not just ignore them. We had to find a place for them to park their cars so we build four temporary parking lots. Each holds about 1,000 cars. First come first served. We also prepared internal public transportation (trams) for these people otherwise they might not cooperate.”

“When the physical system was ready. We thought that there must be some motivation so, we built the “Jakka Center” (Bike Center). In the first year, we wanted to do white bicycles by bringing together the discarded bicycles around the campus, repairing and painting them white. We organized a big event and PR the campaign saying “whenever you see a white bike, just grab it and ride on it”. No one owns the bikes, if you parked a white bike and went to class, anyone could pick it up and ride on it.” 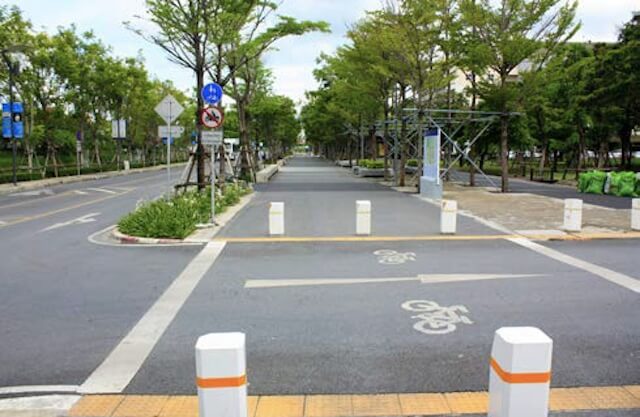 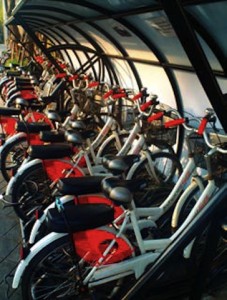 “It turned out to be a valuable lesson. No one looked after the bikes. When they were broken, no one cared. When there was a problem, no one volunteered to fix it. So, we took back all the bikes all over the places. We did not think of this before. Who would be responsible for repairing the bikes? How could we know when a bike was broken? What would happen if a student rode a bike and there was a problem? Should the student leave the bike as is or repair it? We needed to teach them take on responsibility. Back then we had 200 white bikes, all of which were broken. We kept all the broken bikes as a reminder of our first mistake.”

“Coca Cola meanwhile came to look at our physical system which was fully completed. They said they wanted to support this project and sponsored us with some funds that we could use to do whatever we wanted for this project. We decided to use the money to buy new bicycles and made new 420 white bikes. We bought 70 mountain bikes for our security guards and 30 more for the board as personal work bike. We thought that if we wanted our students to use bicycles, our leaders need to use it first. When there are internal meeting we would ride our bikes. The first day that we got the bikes we went riding together the whole 30 of us on our bikes.”

“Then we pushed the Jakka Center again. We operated it as a full service center. There was a sales and buy section, a repairing section to facilitate the students. We manage a one-day borrow and return system. We made a member card which student would use to borrow a bike. The card contained the member’s contact info. If a student did not return our bikes we would call to follow up on them. However, the students took the card for granted, they either lost the card or not follow the rules, so we had to stop using the card and recall all the bikes back into our system again.” 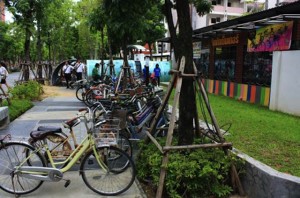 “After that we require student’s ID card or Student card in order to borrow a bike. The system went along better since these cards are important to the students. First, we wanted to have 14 service stations. Our security guards cooperated well and helped taking care of the stations. It was not in their job description but they were willing to help out. If a student returned the bike late, he/she would receive a ticket and have to pay the fee before getting their ID card back.”

“Most people often misunderstood and thought that being in Mahidol you did not need to buy a bike. The university would provide you with one. However, we only have 420 bikes and will not increase the number. We want to see if the students liked the idea. If they liked cycling on campus grounds, they will buy their own bike. The white bikes would never be enough for the number of users that increases everyday. If you come and borrow it on time everyday, then do it. However, if one day the bikes were all borrowed and gone before you came, you will understand the importance of owning your own bicycle and you would probably go buy one for yourself without us having to tell you.”

“I used to bring 50 bikes to parking spots around the campus. The first week everyone was excited and borrowed it to their classroom building, their faculty building, and other places. Then, I only left 30 bikes at the spots in the following week and then only 20 bikes were available. Now, if you notice at the back of a professor or a student’s car there would be a folding bike. We do not really have to tell them how important bicycles were. They have to experience it themselves. Like they say “you would not know the importance of someone or something until the day you lose them”. With bicycles it is the same. When they are gone people start to see how important they are and then buy one for themselves.” 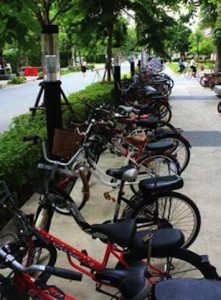 “Now we have done a rough survey and there are about 4,000 bikes in Mahidol University. So, we did bike registration plates so that we can identify the owners. There used to be some cases of theft, the owners have to park their bike at the provided space since we have CCTV’s recording any suspicious activities. However, when we catch the thief the owner does not come to claim his lost bike and we have to let the thief free. The plates therefore helped us find the owners. They are also helpful in checking whether the owner is still going to school here or has already graduated. Can we make the bike useful for public use if it was discarded? We will have to renewal the registration plates annually.”

“We have activities that would make the project more relatable to students by having concerts, bike rallies. We went with a concept of “Jukka is Cool!” or it’s cool to ride a bike. Students begin to be more interested in the bicycles. It became viral and students started to have either a fixed gear group, a mountain bike group etc. It became a trend in/out of the university and more and more people started riding bicycles.

“I got an idea from watching Chula-Thammasat’s Annual Traditional Soccer Match. Before the match each university would bring their intro videos and compete against each other. Before new students enrolling in Salaya campus, we want to use something to communicate with them about this matter so we made short films. The first eight films were shown at the orientation. The full movie is shown on Jakka’s Facebook and was a success since the media reached the students effectively.” 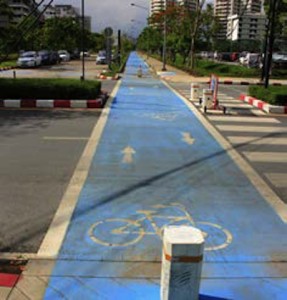 “The quality of the bikes is the first lesson. When we received the money we were thinking about quantity over quality so we bought lots of bikes but they were not for public use. When many people use them they need higher quality spare parts. This lot of bikes was used for almost three years now and I think it is about time to retire these bikes. The new lot will have to be of higher quality regardless of quantity.”

“Nowadays, we have a rotation system and a parking system. Everything seems to go on well at a certain point. However, we want to do more with the project. We will also have a new project with communities surrounding Salaya campus. We want to make a cycling map to go and see the community’s way of life. We will make flyers and mobile application and the project will be publicly announced soon.”

We can see that the bicycle project of Mahidol University Salaya Campus has become successful through the few principles. However, we must be serious about it in order to make it happen. We need to show bikers what privileges they have when they are using bicycles. Those who do not get the privilege will start to see the importance of using bicycles. When bicycle become essential, they also became the priority. 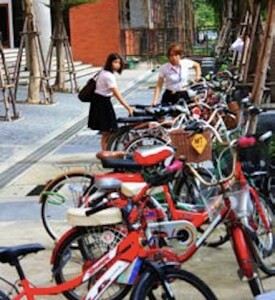 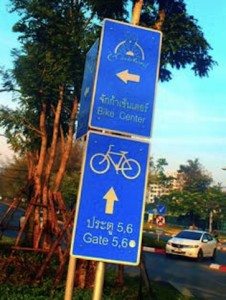 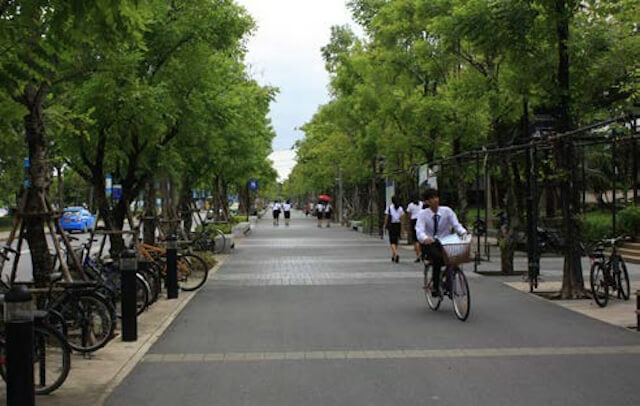 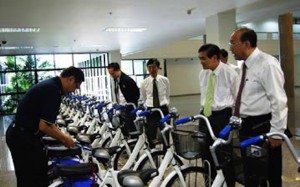