Top
You are here: Home / How to / How to Survive Road Hazards While Cycling 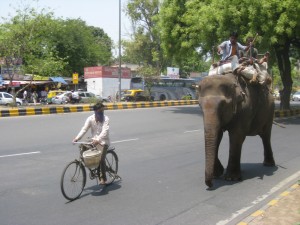 Cycling is a unique sport because its arena is the open road. That’s the same place frequented by traffic, potholes, snarling dogs and absentminded pedestrians.

But sometimes we’re our own worst enemy. Inattention and poor technique can put us on the pavement as fast as any hazard. Use these tips and you’ll be less likely to take a tumble.

It’s every rider’s fate to flat. But it’s relatively easy to limit the frequency. 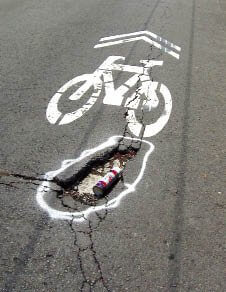 Hitting potholes can bend your rims beyond repair. If the chasm is deep enough, it will send you hurtling over the handlebar when you bury the front wheel and the bike suddenly stops. Here’s a primer on pothole evasion.

Unlike most dangers, tracks can’t be ridden around. You can suffer an instant crash if your tires slip on the shiny steel rails. Ride with extreme caution and follow these safety tips.