Pacelines are organized. They have specific rules. But in big groups like you find in centuries or charity rides, things will be disorganized. This can intimidate even experienced riders.

Sooner or later you’ll find yourself in a big group amid some riders with sketchy skills. It pays to learn how to survive (and also make yourself welcome) in a crowd.

To avoid being the one who causes such a crash, pull your bike forward as you leave the saddle. Don’t lunge and make a hard pedal stroke. Keep your speed steady. When sitting again, push the bike forward a bit. 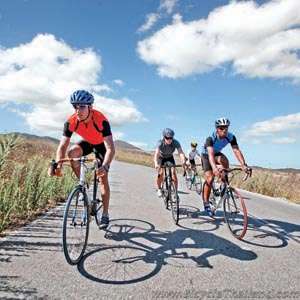 Cycling isn’t a contact sport, but it’s not uncommon to have your arm brushed when riding near others in a group. It pays to learn how to bump into other riders without swerving or falling. You can practice this.

First, go with a cycling friend to a large grassy area like a soccer field. Ride side-by-side at a walking pace. Keep both hands on your bar. Start by gently touching elbows, then shoulders. As you gain confidence, lean more vigorously on the other rider. Soon, you’ll be bumping each other with abandon and throwing in a few head butts for fun, all without going down. (Of course, always wear your helmet just in case.)

Riding relaxed is the key to absorbing contact without swerving. Have slightly bent elbows, a firm-not-tight grip on the bar, and loose arm and shoulder muscles. If you’re relaxed, your body can absorb the shock before it gets to the handlebar.