Top
You are here: Home / Races and Events / Cycling Miles for Children’s Smiles

Riding a bicycle may be a normal everyday activity for some but for the participants of the Tour de Thailand it’s anything but normal. Cycling a combined distance of over 2,100 kilometers in three segments (northern, central and southern) in less than 30 days, from the northern city of Chiang Mai to the beautiful island beaches of Phuket in the south, is a feat rarely attempted by an everyday cyclist. But, ‘everyday cyclist’ is exactly how most of the Tour de Thailand participants would humbly label themselves. They would also say that the purpose of their effort is what encourages them to completion amidst the physical challenges of the ride and the associated rigors of traveling abroad. Rising early every morning in order to complete a day’s ride, some in excess of 100 kilometers, the steadfast riders are rewarded with the beauty, hospitality, and intrigue that only Thailand can offer. 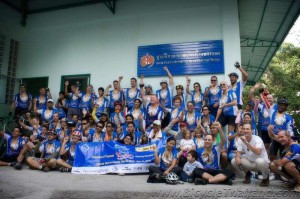 What began as one man’s idea of how to discover a country by bicycle, meet its people, and give something to them in return for their geniality, has grown into an annual charity bicycle ride known as the Tour de Thailand. In years past, the organizers of the Tour de Thailand have worked to benefit local and international charities: helping abandoned babies (Ban Nor Giank), giving tsunami relief (North Andaman Tsunami Relief), fighting cancer (MAX Foundation), assisting the blind (Foundation for the blind in Thailand under the royal patronage of H.M. The Queen), and building orphanages and community centers (Hands Across the Water).

The Tour de Asia bicycle touring company has raised more than eight million baht for local and international charities since 2003. In the past two years, working with Operation Smile, the Tour de Thailand charity bicycle ride has collected more than two million baht, providing for numerous cleft lip and cleft palate surgeries for children in need.

In keeping with the spirit behind the original idea of Tour de Thailand, its organizers are proud to be raising funds for Operation Smile missions again this year. These missions help children in need of cleft lip and cleft palate corrective surgery and many families in developing countries cannot afford to pay for the surgeries. Each rider participating in the Tour de Thailand charity bicycle ride sets, meets, and often times greatly exceeds their fundraising mission using a OneSmile page, available at www.OperationSmile.org 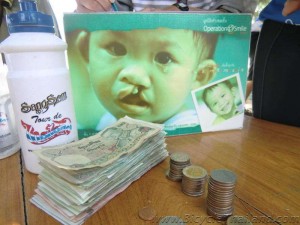 Understanding the need of children born with a cleft lip or cleft palate who often have difficulty eating, speaking and socializing, is what fuels the riders’ determination to complete an arduous cycling journey such as the Tour de Thailand. One rider who has completed various segments of the tour several times says, “I keep coming back because of the camaraderie, the route changes, and the charity aspect of the ride.” – David Claycomb (2006 – 2010)

“It’s what sets it apart from other rides for me. The sense of giving back to the people who have graciously allowed me to travel through their beautiful land.” – Paul Hamon (2009 & 2010)

“It’s the perfect cycling vacation for me because I have limited time due to my work schedule and I can join for one or two segments each year and support a charity I have trusted and believed in for many years.” – Don Huttner (2009 & 2010)

“I got donations from friends and family during the whole ride. Using the OperationSmile online donation page made it really easy. People kept asking me how difficult the ride was. I had to keep telling them that it was a tough but very rewarding experience. The ability to raise money for such a worthy cause and to complete the entire bicycle ride gave me a feeling of self accomplishment that I still keep to this day.” – Mike Conroy (2009 & 2010)

Seeing a smiling child waving from the roadside as the cyclists of Tour de Thailand pass by is just one more reminder of how every person, working within their own scope of ability, is able to positively impact the life of another.

Anyone interested in participating or learning more about the Tour de Thailand can visit www.tourdethailand.com