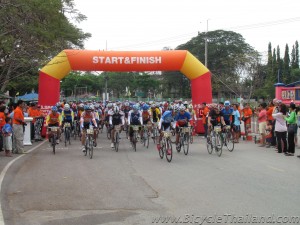 On Sunday, February 19, 2012 the city of Pranburi was host to over 300 cyclists who competed in this year’s installment of the Annual Promoting Health by Cycling Road Race. Pranburi and its annex of Paak Nam Pranburi are small towns residing along the Prachuap coast, just a short drive south of the larger holiday destination cities of Cha Am and Hua Hin. The annual road race is organized by the municipality of Pranburi with support volunteers from the city’s park services and Tanarat Thai Army Camp personnel.

The event drew plaudits from participants who noted the organization of the registration process, multiple water stations along the route, and the presence of motorbike escorts and emergency vehicles for each category of racers. This year’s race saw riders in the field from as far away as Phuket and Thalang. Several other cycling clubs were well represented with Surat Thani, Ranong, Chonburi, and Cha Am making up the bulk of club jerseys present at the race. 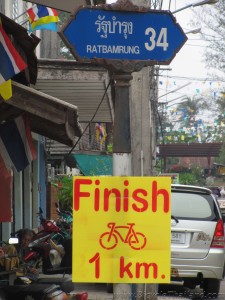 The weather cooperated nicely for the entire day, keeping the racers relatively cool under grey clouds that never made good on their threat of early showers for competitors and spectators alike. The race start and finish point proved to be a beautiful venue, with manicured parks alongside the old wooden buildings of what used to be downtown Pranburi in years past. Even though many consider Pranburi city to now be the shops and superstores that hug the main Phetkasem Highway, the hospitality of the ‘old Pranburi’ area shined through in true Thai fashion as food vendors and drink carts lined the small road in front of the Trieang Ukdom Sueksa Schoolyard.

The first category of racers were released just shortly after the conclusion of the opening ceremony at 11:10 and most competitors completed the race between 2.5 – 3 hours. The first group to complete the race did so at the 2 hour mark,  quite a respectable time for a 75 kilometer distance. One rider completed the race in under 3 hours on a fixed gear bike!

To wrap up a successful day of Sunday racing riders were treated to a post race Thai style lunch before the commencement of the closing ceremony where trophies, and cash prizes were awarded. Participants also had the opportunity to win sponsor donated items in a raffle during the award ceremony.

With its great organization, scenic course, and close proximity to popular destinations like Khao Sam Roi Yot National Park and the beaches of the Prachuap coast this author looks forward to this race in years to come.