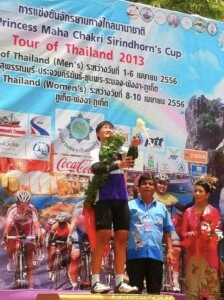 Jaruwan Somrat, the junior rider of Thai national team, has taken the stage 2 of the international race “Princess Maha Chakri Sirindhorn’s Cup Women’s Tour of Thailand 2013” with 83.3 kilometers after Hong Kong’s Meng Zhaojuan was disqualified for drafting Tuesday from Phuket to Phangnga province.

Jaruwan, of T-All Star Team, and Hong kong ace have broken away for the bunce through the finishing line as  Zhaojuan was the winner 2.16.54 hours followed by Thai junior, but Hong Kong girl was penalized for drafting behind the manager’s team car after crashing with Myanmar rider. Jariya Chumlue, another of T-All Star Team, was the second place with 2.17.02 hours. 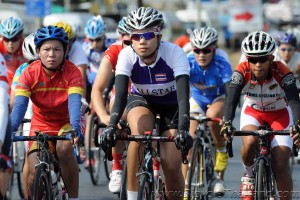 The final stage (stage 3) Wednesday for Women will start from Phangnga to Phuket at 09.00 am.