WHEN IS THE BEST TIME TO TAKE A BICYCLE TOUR IN THAILAND? 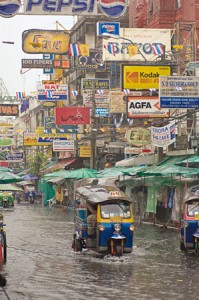 The best time to take a bicycle tour in Thailand is during the months between October and April. Thailand’s rainy season ends towards the end of October and “cooler days” begin. Thais celebrate Songkran (the Thai New Year) during the first week of April, this holiday marks the beginning of the hottest time of year as well as the rainy season. The heat during the day can go as high as 101 degrees (38 degrees Celsius) on a daily basis and the humidity is drenching.

The rainy season can also be considered refreshing and a nice relief from the blaring sun, but it also brings monsoons and flooding in most areas of the country making many roads impassable and some cities streets inundated. The South of Thailand experiences the heaviest rains while parts of Central Thailand experience the least.

WHAT ARE THE ROADS, TRAFFIC PATTERNS, AND DRIVERS LIKE IN THAILAND?

Primary and Secondary Roads – All major roads and most secondary roads in Thailand are sealed. At times, roadwork can cause poor riding conditions that may justify a change to your intended route.

Roads and Shoulders – Most roads, especially major highways, have a wide shoulder that is well marked and paved. Some secondary roads may not have a shoulder but the traffic level is lower and drivers are very aware of motorbikes and bicycles using the side of the road. Understanding the informality of Thai traffic patterns in small villages and cities is essential to navigating your bike safely http://bicyclethailand.com/cycling-safety-in-thailand/ 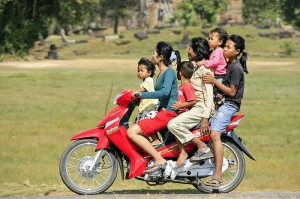 Motorbikes – Lots of locals use motorbikes (110cc and below) to get around. It is not uncommon to see 3, sometimes 4, and even up to 5 people on one motorbike! A surreal vision is an entire family on one motorbike.

Honking and Hellos – Thais use their horns to communicate while driving. Having a Thai driver honk at you while you’re riding along the road may lead you to believe that you’ve done something wrong, or that some nice Thai person is trying to say hello. Both of these theories are right and wrong. While Thai drivers do honk to say hello or to warn you that you are veering into traffic, most drivers honk to alert you that they’re coming up behind you, so you should avoid getting in their way.

Left-hand Drive – Thais drive on the left side of the road. This fact could have some visiting cyclists a little bit confused when crossing major roads and navigating large intersections. The confusion is a little less on the main roads, as traffic patterns tend to be more straightforward on roads without crossing and merging vehicles. Riding in populated areas requires cyclists to pay closer attention to slower moving, but more erratic, traffic. 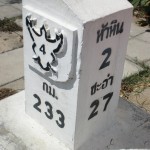 Road markers – Thai roads have kilometer markers that are four-sided white pillars with black writing (city names are written in Thai script) on three sides. For a complete description of these markers please visit http://bicyclethailand.com/august-making-sense-of-kilometer-markers-in-thailand/

Tip – Most bicycle mirrors can be mounted to either side of a handlebar, allowing a great rear view of approaching motorbikes and vehicles. A mirror that clips or straps to the handlebars, that can easily be moved from left-side to right-side, is highly recommended.

WHAT KINDS OF HAZARDS CAN BE EXPECTED ON THE ROADS OF THAILAND?

Dogs on the Road – There are lots of dogs in Thailand. Cycling from town to town you will encounter a wide range of dogs, some of them are pets that are well-cared for by their owners, and others are scruffy strays that hang around in packs on the sides of the road in rural areas. Most small villages, roadside shops, and gas stations seem to have two or three mangy dogs laying about. It is also not uncommon to come across dogs laying directly in the middle of the road.

Tip – How to handle chasing dogs – Cyclists I have met on the road have offered their tips on how to handle dogs. Some riders squirt water on the dogs from their water bottles. Other riders have tried kicking the dogs only to lose their balance and fall off their bikes. Keeping a stash of small rocks inside a handlebar bag and throwing a few of them at a chasing dog to discourage further pursuit is another method I’ve heard of, even a fake throw seems to persuade some dogs to stop. For more tips on how to deal with dogs while cycling please visit http://bicyclethailand.com/how-to-deal-with-bad-dogs-while-cycling/

Road kill – Snakes are splattered flat and lifeless on the shoulder of nearly every road in Thailand. Coming across a live snake on the road is a rare possibility, but most are in a hurry to get off of the road and safely hidden in the roadside brush.

WHAT GENERAL SAFETY PRECAUTIONS SHOULD BE TAKEN WHILE CYCLE TOURING IN THAILAND?

Thai people are very mellow and smiley. Thailand is the perfect low stress country to begin a cycling adventure, especially for women. That doesn’t mean you can let your guard down. Taking a few precautions goes a long way to ensuring that you enjoy your cycling trip.

Thievery – Thailand is a relatively safe country to travel in. Several touring cyclists have reported using security bags and money belt systems from companies like PacSafe to lock up valuables on the bike and in hotel or guesthouse rooms. A good practice is to keep valuables (like laptops and mobile phones) out of sight when you’re not using them.

Bike Safety – The majority of Thai guesthouses and smaller hotels will allow bicycles to be rolled directly into rooms. If a hotel refuses to allow you to keep your bicycle in your room a compromise of storing the bicycle inside the lobby or another secure location can usually be reached with hotel staff. Carrying a small cable lock is very useful for those times when your bicycle will be out of your sight while shopping or sightseeing.

Con Artists & Scams – Because they are traveling with their own form of transportation and are usually looking to find budget accommodation most cyclists experience less contact with hotel touts, tuk-tuk drivers, and other con artists that seem to linger around Thailand’s popular tourist areas.

BICYCLE SHOPS – Go to http://BicycleThailand.com/bike-stores for a complete listing of bicycle shops in Thailand.