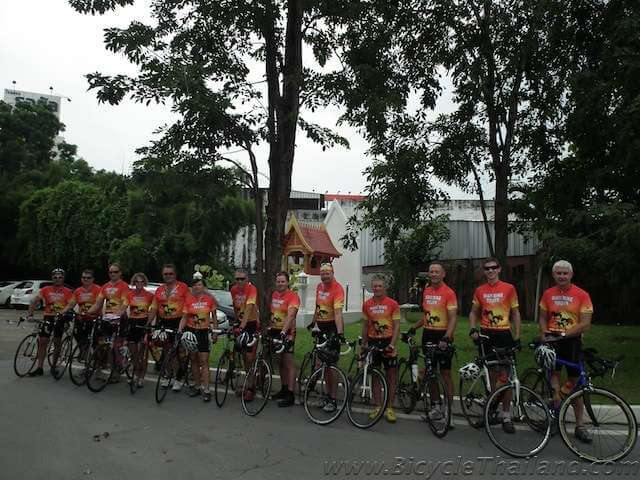 Earlier this month, I joined Siam Bike Tour’s Bangkok to Phuket bike tour, a ride that follows the Gulf of Thailand and the Andaman Sea on its 800 km coastal route (view route map image).  This tour was a great way to take in some of the diverse scenery Thailand has to offer, while keeping the legs spinning in the company of like-minded people.

The night before the first stage of the tour (there are 8 in total with a rest day in Chumpon) there was a pre-tour briefing in Bangkok, which provided important information about the tour in terms of safety, food, the route, Thai culture and general logistics. We were also given a day bag (for putting belongings into that we wanted to access during the day while riding) and a jersey. The briefing was also a good chance to meet our fellow riders: in the group there were 12 of us, with six countries represented – Australia, Austria, Germany, New Zealand, Norway and Switzerland.

The next morning, we departed for Petchaburi (the starting point for our ride, so as to avoid the Bangkok traffic) in minivans where our bikes were assembled before we set off. 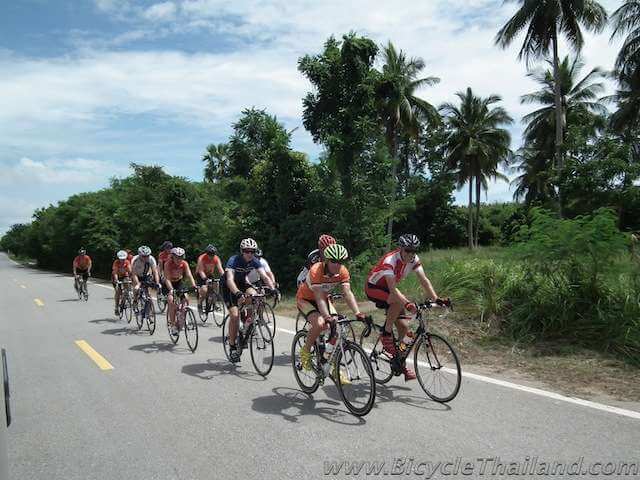 The bikes provided by Siam Bike Tours were good quality and well maintained aluminium road bikes – Giant and Canyon brands. A couple of riders had also chosen to bring their own bikes. During the tour registration process I’d completed several weeks earlier, Siam had asked for my riding measurements and pedal preference so they could provide the most suitable set up. Our tour leader and driver were competent bike mechanics and had tools on board the tour bus in the event of any problems along the way.

During the tour there was the opportunity to see impressive and iconic Thailand views along the coastline: including rice plantations, temples, limestone mountains, and small villages – to name just some of the scenery. It was very useful to have one of the Siam Bike Tours support staff in the tour bus taking photos of the surrounds and our group as we cycled, so we could focus on just taking in the experience with the knowledge that we’d have a CD of photos provided at the end of the ride to look back on.

Some of the highlights for me personally included the quiet beachfront roads in and out of small coastal towns, and some spectacular temples on top of mountains. As some of these temples were within close proximity to where our tour stopped for the day (for example, in Prachuap Khiri Khan and Haad Baan Krut) this provided a good opportunity for an afternoon excursion for those who were happy to exert some extra energy. Others in the group elected to relax with a massage or swim at the hotel.

In addition, the other cyclists in my tour group were good companions, who had interesting stories to tell both as we cycled along, and during meal times. On the subject of food, dining at the local eateries already tried and trusted many times by our tour leader was also enjoyable.

As we rode, the group determined the speed and faster riders sometimes went ahead together, waiting at designated refreshment stops where water, soft drinks and fresh fruit were provided.

When we did stop (every 30 kilometres or so), everything seemed to happen with a minimum of fuss (for example snacks, drinks, minor repairs etc). The organisation and experience of the tour company was evident in things running smoothly. For example, sometimes the tour bus would drive ahead (for example, to pre-order the group’s lunch), or behind (such as in the event of a cyclist was having a mechanical problem).

Although rarely required, the tour bus (which was transporting the luggage, spare parts and tools etc) was also available for cyclists who wanted to take this form of assistance at any time.

When we reached our destination for the day, the hotel accommodation was also comfortable and clean, and was a good place to relax and get a good night’s sleep after a day on the bike.

Our tour guide and founder of Siam Bike Tours, Martin Brot, was a very competent tour leader and good cycling companion – having a real passion for cycling with a great deal of road and mountain bike racing experience.  A Swiss national, Martin has travelled in Thailand for the past 20 years, and has been living in the country for the past 10, so had a good understanding of Thai culture.  He was knowledgeable about the countryside in which we were riding through, and expressed himself quite well in Thai.

In summary, I’d recommend this tour to any enthusiastic cyclist who is reasonably fit and wants to experience Thailand’s scenic coastal region in an organised and comfortable fashion. The company also offers a variety of other tours – which might be of interest if you, for example, would like to cycle in the mountains of northern Thailand, or explore along the Mekong River in the north east, to name just a couple of the other options.